The Rudge Whitworth hub spinners originated back in the early 1900s when Whitworth Cycle Co rescued the ailing Rudge Cycle Co to form Rudge Whitworth Ltd. Rudge wheels were originally sold as an aftermarket fitment to quickly deal with frequent punctures due to tyre unreliability, and in the emerging sport of motor racing, it was a major issue. Being able to change a wheel quickly in the event of a puncture, or when the tyres were worn became a great advantage in winning races. The rapid-release system became standard in Grand Prix racing and lasted until the 1960s. By design, the hub spinners were self-tightening creating hub-nut inertia as the car drove forward. With just a couple of firm blows of a copper-faced hammer, the spinner could be easily tightened or loosened for a quick tyre change. The Rudge spinners were designed with left and right threads for each side of the car and the spinner would be turned in the direction of wheel rotation to remove them.

Unlike many racing teams from the 1950s such as Mercedes, Ferrari and Jaguar, Porsche did not extensively explore the benefits of Rudge wheels on their race cars. As part of the evolution of the 550 Spyder, Porsche did get a limited number of wheel sets manufactured with the spinner hubs. Each were slightly different in design with the first appearing on 550-05 at the 1953 Paris Auto, with oval shaped holes with lips rolled in and a pyramid style central piece. The wheels were unique as they were 16” in size with alloy outer rims riveted to a steel center, but only 3.5″ wide. 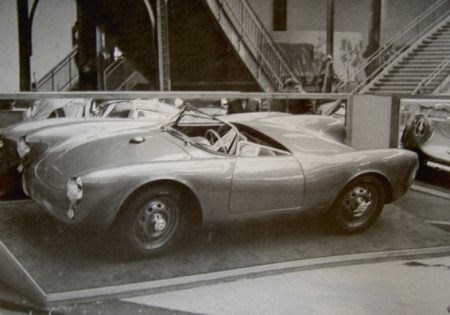 The standard wheels were all-steel 15” x 4.5” rims. The second set designed with a number of rivets around the center hub and flat long oval holes with lips rolled out was fitted to 550-06 at the 1954 Brussels Auto show. 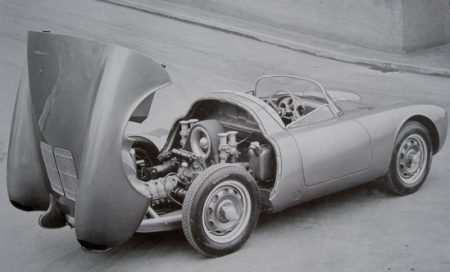 The 550-05 rims were tested and used on 550-07 during a number of European races such as Agadir and then later at the 1955 D’Hyeres race. There was another set similar to those on 550-06, but with the oval holes rolled in, which still exist today. 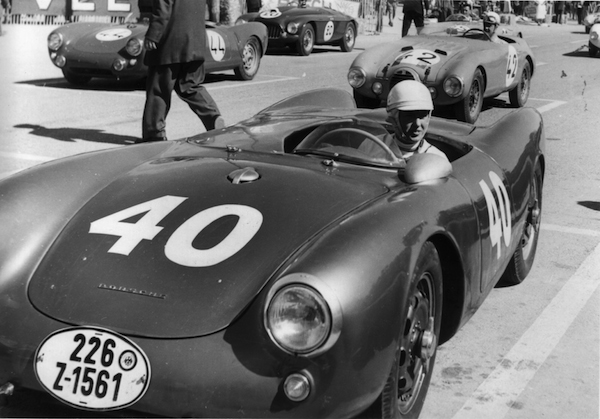 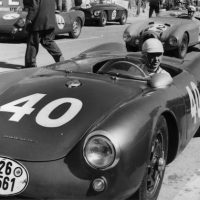