I have been an avid follower of the Mille Miglia for over a decade, with a bucket list dream to be there and experience the spectacle of the cars as they were being prepared to leave the start line for the four-day return journey from Brescia to Rome and back to Brescia. This year I was invited by the owner of an original Porsche 550 Spyder to co-drive with him in his maiden Mille Miglia race. The thought of being in command of a freshly restored €4 million pocket-rocket with an aluminium body, quad-cam engine and synchro gear box, unleashed on the open roads of Italy, made me a tad nervous. 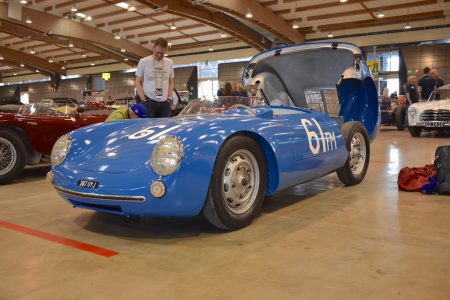 Known as the ‘most beautiful race in the world’, the Mille Miglia is steeped in tradition. This was a race, in which Hans Herrmann and Herbert Linge driving a Porsche 550 Spyder, recorded a time of 12 hours, 35 minutes and 44 seconds at an average speed of 127 km/h (79 mph) to finish first in class in 1954. Such speeds, though, are a thing of the past with the modern day Mille Miglia now being a regularity race based on time-speed-distance. To qualify for race entry, cars need to be a model that partook in the original race between 1927 and 1957, and with nearly double the entries than positions accepted, we were fortunate to secure one of the 430 spots on offer.

For many entrants, it is a serious race where the lead-up is spent training for the time trials and honing their navigation skills. The pre-war open-wheelers are the cars of choice as the navigator can see the precise second the front wheel crosses the wire at the start and finish of each trial, giving them an added advantage. As novices, we were happy to at least complete the full race. 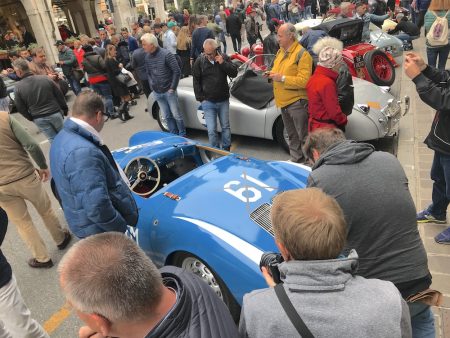 Following the race on social media can never give you a true insight into the whole process and experience, which started a couple of days before the race. The accreditation checklist sheet consisted of nine stamps from admin and technical including scrutineering plus fitting of a GPS to the car, to producing local and international licenses plus a medical certificate to attain a sport’s license for the four days. In addition, there were police checks and a briefing from the course clerk, all of which took most of the day. The cars were assembled in the large shed known as the Brixia Forum on the outskirts of Brescia, then escorted by a fleet of police motorcycles into the city centre for the final check which was the ‘sealing of the cars’ and a display in the streets, before each car made its way up the red-carpet ramp to be ‘farewell-ed’ on the first leg of the Mille Miglia late in the afternoon on Wednesday. 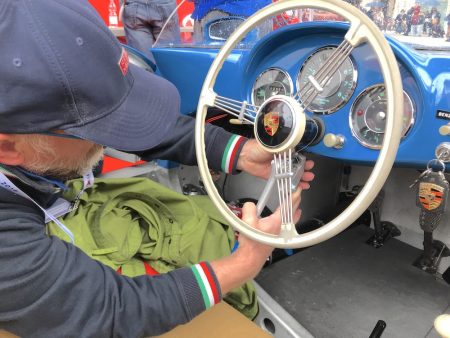 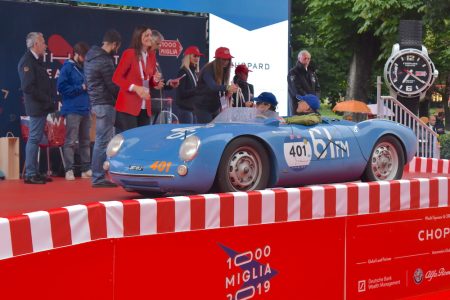 Each team was given a package consisting of a Maps Book (in case you got seriously lost) and a Road Book for each of the four legs. The Road Book was your bible with illustrations of every turn and distances between, and as long as you zero your trip meter at the beginning of each stage, your location pretty much matched your book and your meter. We encountered a few hiccups, like on day three where our Road Book jumped from page 64 to 81 in true Italian style, or when the persistent rain made it impossible to peel the pages apart, so we resorted to following the silver Spyder #404 for the rest of the day to the final checkpoint. 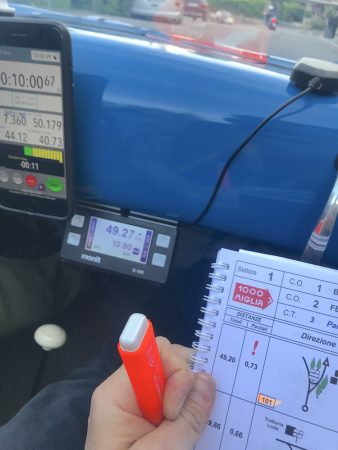 Each day was a separate leg, and within each leg were a number of stages. Each car number was designated a start time and ours’ being #401, left the start line over two hours after the first car, which had some disadvantages. Starting later usually meant that you encountered more city traffic getting out, you arrived for lunch mid-afternoon and also finished well into the night before finding your allocated hotel room, sometimes another 20 minutes from the finish line. 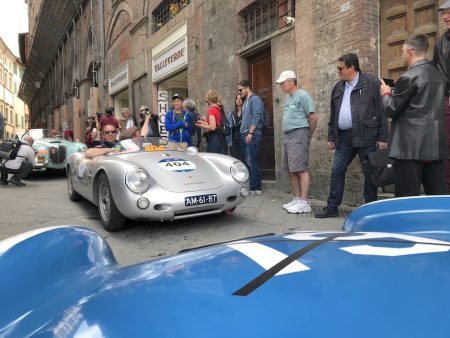 We started the second leg, which was from Cervia-Milano Marittima to Rome at 08:38 am, with the first of four stages covering 121.06 km to be completed in the required 3 hours and 20 minutes. Besides driving from point A to B, there were a number of ‘time trials’ and ‘average speed trials’ along the way. We had a rally GPS trip-meter Velcroed to the dash, but it wasn’t as high tech as other teams who had multiple devices fitted displaying every variable algorithm to arrive at the next sector within 5/1000 of a second by way of a red handheld trigger button, which looked like it was capable of detonating a bomb. On the other hand, we used the stop watch from my iPhone to start the next sector seamlessly! As we completed more time trials, our speed and timing skills gradually improved. 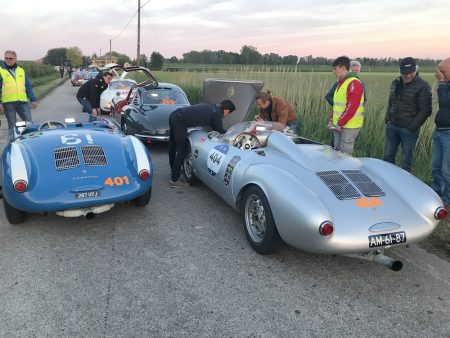 To try and put into words what it felt like to be a competitor in the Mille Miglia is like executing a secret handshake, as only those who have actually experienced it, could nod knowingly. I didn’t know what to expect, as all I had heard was that it was very challenging and wasn’t a Sunday drive through the Italian countryside enjoying the beautiful scenery, but instead, it was something you would never forget for the rest of your life. 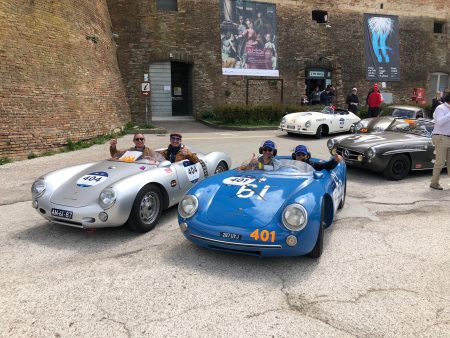 This race wouldn’t be a success in any other country as the passion for cars and racing has always been woven into the fabric of the Italian culture. Most memorable were the spectators along each leg, and it didn’t matter if it was day or night, sunny or raining, small village or big city, they were always there waving their flags, cheering and clapping. The mix of people was amazing too – nonas with their grandchildren, old men who would remember the original race speeding through the cobbled streets, nuns with school children, they all lined up in a row with their hands out for the drivers to high five them all as they drove past. 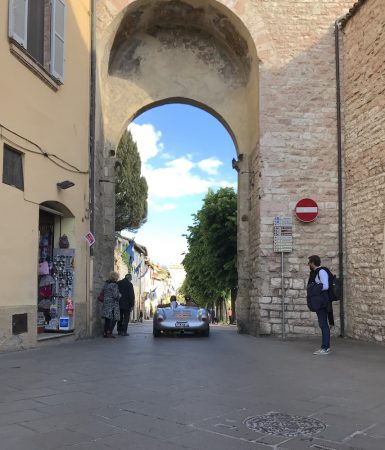 The days were long, driving for well over 12 hours, snacking at fuel stops with toilet breaks amongst the trees before checkpoints. When you eventually made it to the hotel physically and mentally exhausted, the underground carparks had turned into emergency triages with support teams repairing cars throughout the night in order to start on time the following morning. By day three you are running on pure adrenalin, and although you have had little sleep, it was hopefully quality enough to get you through the next day with the concentration and skills required to either drive or navigate for another twelve hours. 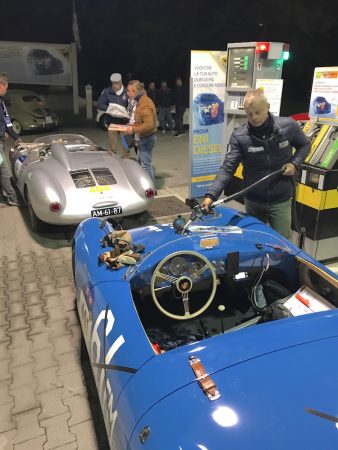 Our team in #401, along with another 550 Spyder team in #404, forged a bond in the downtime before the start of the race, and being the first time competing for all drivers involved, we decided to stay together throughout the race. As each driver had extensive race track experience, the race-bred performance of the agile Spyders was put through their paces across the four days. 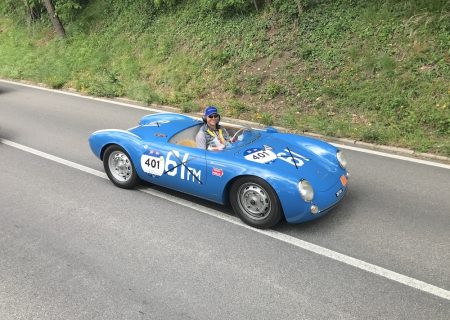 My whole perspective of the 550 Spyder changed once we hit the open roads in the Mille Miglia. These cars were simply designed for racing, nothing more, with every feature purposeful in their design and functionality. They were fitted with original 16-inch rims with only five-inch tread width, but they were glued to the bitumen around every corner and with 60 mm brakes, the racer stopped just as fast as it accelerated. 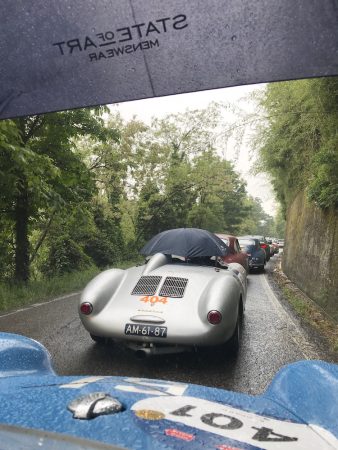 Mastering the double clutch for the synchro gear changes while also accepting the small nuances of the quad-cam engine and steering, was all part of the driving experience. With an optimal ‘power to weight’ ratio, these mid-engined Spyders were perfectly balanced in every way. We raced in all conditions, in the dry and wet and at night we snaked through the windy mountain roads along with a 356 speedster, all within a car length of each other at a breathtaking speed. There were very few cars that challenged to overtake us during the whole race. We had also befriended one of the police motorcycle escorts who helped us manoeuvre through the congested traffic and around the city streets to get us out onto the open roads faster. 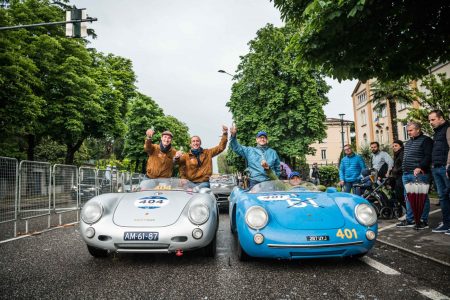 We weren’t there to win, only to finish, and we officially came home in 237th position out of the 361 cars that completed the race. Reflecting on the whole experience, I don’t think I can drive the Mille Miglia again, as the four days of pure exhilaration was surreal and could never be replicated. I can now just tick this dream off my bucket list!

To view a video of the 4 day Mille Miglia race, click here